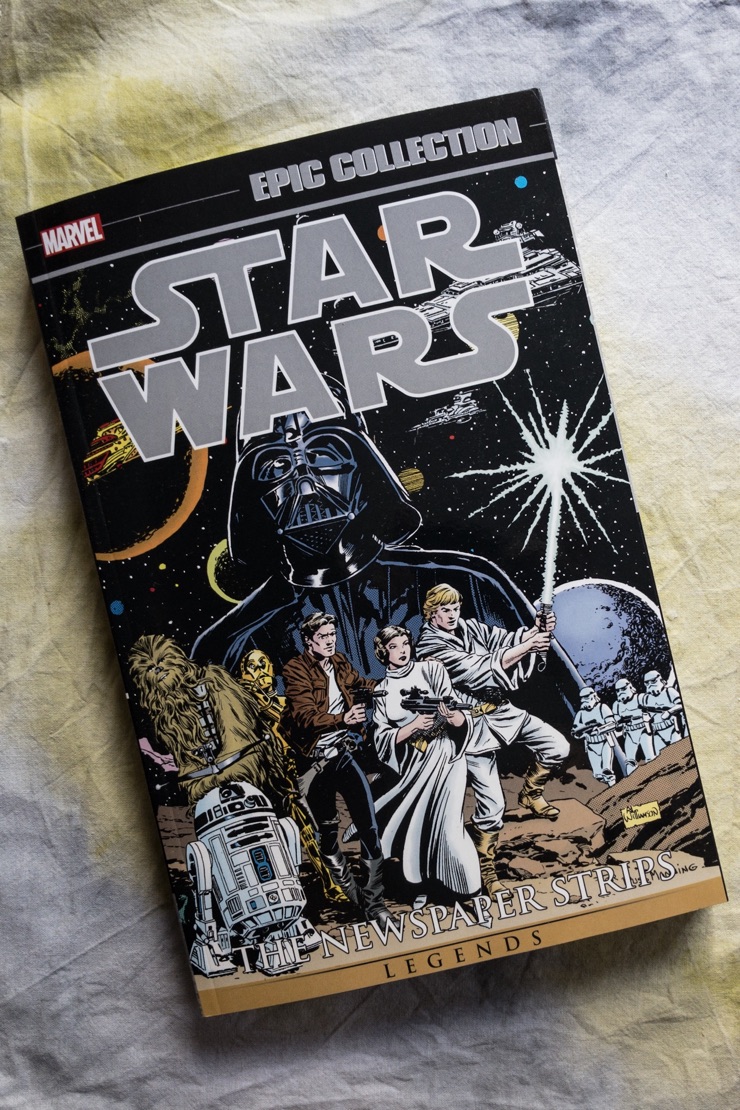 FYI, from now on i’ll call every post concerning my Star Wars collecting habit „relics from a galaxy far away“.

Sometimes gift vouchers and the inventory of a store dictates which version of the Star Wars Newspaper Strips one reads.

Initially i wanted to get the IDW reprints, large hardcover books presenting the material in their original black and white renditions; but our fridge left the coil last week and while buying a book for one of my nieces, i came across the coloured newspaper strips edition as reprinted by Marvel comics in their Epic Collection line of Star Wars comics.
The collector in me wants to see the b&w versions while the comic reader is happy with the coloured version arranged in the wrong order.
The Star Wars nutter wants them both.
Now.
Send help.

Niv and i finally had the chance to catch up on the things orbiting the space of our interests. Not only did we marathon through trailer talk and a few reviews, we also produced one of our best outtake reels so far

They are available on the podcatcher of your choice as well as iTunes, acast and stitcher.

We hope you enjoy listening to it as much as we enjoyed recording.

This video from Retroblasting opened my eyes towards the toy industries depnendence on adult collectors and how much we are willing to accept.

Yesterday we got the trailer for Episode VIII, now we get another Star Wars related trailer; for the fourth season of Rebels to be exact.
Things are coming to a close for the crew of the Ghost, but will the Spectres be exorcised or continue to haunt the Empire’s house? What sounds strange is the „focus“ on Sabine, which is a great character but never felt like the broken girl she has been adressed as in the trailer.
But it could also just been used to further the drama. Anyways, i’m looking forward to see season four; and it seems i’m one of the few people who is ok with the fillers in season three.

The teaser for Thor Ragnarok has won this round. Can’t help myself, the colorful nature of it resonates more with me at the moment. Have you paused the scene in the Grandmaster’s lounge yet? The Kirby art on the walls and the shrunken down Celestial look aaaaamazing.